Sandra arrived at the Kensington public housing estate in the 80’s as a single mum with her young family. High rise, high density public housing living was new to Sandra.

“It was a learning experience and I had to adapt to living so close to neighbours. I learnt the importance of being mindful of other people,” Sandra explains.

In those early days, Sandra soon connected with her community. She became interested in the role of the local church social worker, “Sparksy”, especially the way he helped local kids who got themselves in to trouble. 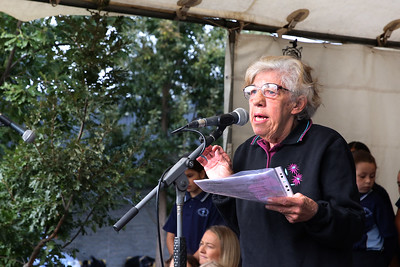 She soon became an active community member and is today a pillar of the Kensington community after nearly 40 years of living there.

In the early 90’s Sandra was invited along to the Tenants Association meetings where she became interested in tenants’ and landlord’s rights and responsibilities. She was part of the group that recommended improvements to Government such as changing from wood to gas heaters so tenants didn’t have to chop wood!

Becoming Chairperson of the Kensington Public Tenants Association was a natural progression for Sandra. In the role she represented the community on many high-level committees and working groups including the Kensington Community Liaison Committee (CLC).

The CLC was established to guide the redevelopment of the former public high-rise estate into a mixed tenure community and communicate progress with the neighbourhood. The redevelopment was the first of its kind in Australia.

“The Kensington redevelopment was a big step and a considerable commitment from everyone. It was a big learning curve for all committee members, and we did our best to work through problems and work together.

It may not be 100% perfect, but the result is we now have a really pleasant estate and people are proud of where they live. We feel we no longer wear the stigma of being public tenants.”

Sandra is loud and proud in dispelling the myths about public housing residents. “Nobody wants to live in public housing. We have had some very wealthy people live here who have unfortunately hit rock bottom. It is life’s circumstances that have brought them here.”

She continues, “Many people have the wrong opinion of public tenants. They think tenants are not good people and not as capable as others in society; that public housing is full of druggies and alcoholics. People forget that government housing was built for low income working families after the depression, and for the many men and women who came home from the war.”

The Tenants Association, pioneer Kensington services such as the Kinder, the Recreation Centre, the health centre and child care centre, have all benefitted from Sandra’s community connections and insights. As has the local school where she has safely guided children across the road, rain, hail or shine, for close to 20 years in her role as School Crossing Supervisor. 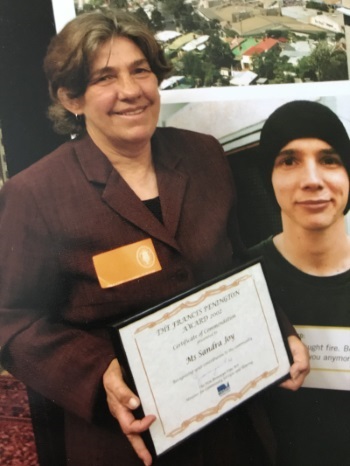 In recognition of her community commitment, Sandra has received numerous awards for her community service including a Federal Government Centenary Medal for service to the community through public housing, a number of City of Melbourne awards including for the “Relocated” project and in recognition of her work as a School Crossing Supervisor, and two Frances Pennington Certificates of Commendation for outstanding voluntary contribution to the Kensington public housing community.

Nowadays, Sandra joins a host of local organisations around the table, including Unison, in planning the annual Kensington Community Festival and is still very much involved in community events and activities.

When asked why she does what she does, Sandra says it’s simple. “It makes me feel good to give something back to my community. I really like chatting to my neighbours. Most communities have a lot in common and sometimes all it takes is a bit of encouragement to get things moving to bring people together. Home is what you make it.

I think it is good for my mental health to be involved and to chat with neighbours about what is working and how we can improve our community.”

After 40 years in Kensington, Sandra has many fond memories. She has met many great people and learnt about other cultures. She smiles as she talks of the Holden Family Circus of 14 kids who lived on the estate with their camels, monkeys and horses.

She has also seen change. She has witnessed the decline of the social welfare role of the church to a wider spread of funding and support services; has been involved in saving local institutions from near closure or takeover; and has lived through the transformation of her home from a gated community to a new open mixed community. Once Government owned and managed, Kensington social housing is now managed by Unison Housing with an added emphasis on community building. Sandra approves.

Kensington is home, and Sandra loves nothing better than sitting outside. “I feel a strong connection to this place. My favourite past time is sitting outside chatting with neighbours and watching the small changes around me; in the garden, the wildlife and the birds,” she says with a big smile. “You know a bird may not be around one year but then it comes back the next.”

And her proudest achievement?  “Tearing down the barriers,” she says emphatically. “Removing the fences opened up the area to everyone. We now have the neighbourhood kids playing in the playgrounds. Before the public housing estate was a closed community and people would walk around it. Lives have been improved and now everyone in the neighbourhood is connected.”

This article was published on 1st January, 1970