Home > News > From backstage for the Rolling Stones to the Black Saturday fires; This is Eric's story.

From backstage for the Rolling Stones to the Black Saturday fires; This is Eric's story. 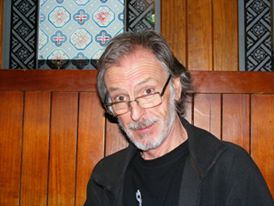 Born in the western suburbs of Melbourne, Eric began work in sound, lighting and backstage with music venues, theatre, radio and television in 1970. Highlights of his career include stage and sound work at the Sunbury music festivals, Kooyong Tennis Stadium with the Rolling Stones and Bob Dylan and the now demolished Dallas Brookes Hall with various local and international jazz musicians.

He moved to the Victorian country in the early 70's and joined both CFA and SES as a volunteer while still commuting to Melbourne and Sydney for work. “Volunteering has always been a big part of my life, particularly in the Emergency Services and welfare areas” he says. “I like to give back to the community.”

Eric has had incredible life experiences, some challenging and confronting, but incredible none the same. He worked at The Fitzroy Community Youth Centre in the late 70's as a probation and welfare officer counselling and assisting unemployed youth searching for work.

His commitment to the community is remarkable. He drove a truck to deliver donated goods and medical supplies to the Alexandra Shire post Black Saturday.  During the Queensland floods in 2010, he joined Red Cross and assisted with evacuee registrations and inquiries.

Eric’s latest role with the Red Cross was to help get Care Packages out to people in need. A COVID-19 Red Cross/ Victorian Government initiative working with partners such as Foodbank, Care Packages enabled food and essential supplies to get out to people most in need due to the pandemic.

After retiring from the entertainment and tourism industries, Eric moved into his Unison over 55’s unit in Kensington and considers himself lucky.

“I was in the right place at the right time. I was sleeping on a friend’s couch at the time and my mental health wasn’t good.” Eric said. “ I was stage manager for the annual Seddon Festival for 5 years and got to know the local MLA who introduced me to the Housing for the Aged Action Group who helped me apply for my unit.”

"I am more than happy here,” Eric said of his home. “I can’t believe I have such a great view of Flemington Racecourse and fantastic sunsets!”

We applaud you Eric. Thank you for sharing your story and thank you for your incredible service to the community.